Spaghetti with strips of veal and fennel 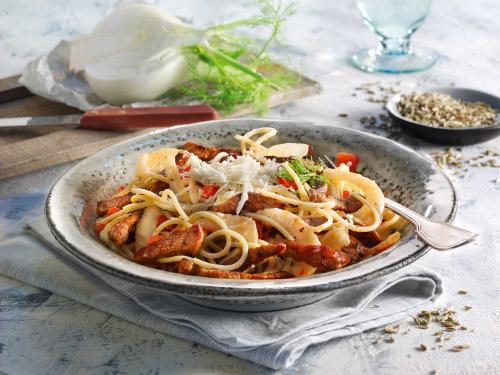 Remove the veal from the fridge half an hour before starting to prepare it. Going with the grain, cut the veal schnitzels into thin strips. Heat a non-stick frying pan on a medium heat. Add some oil and brown the strips of veal, tossing frequently. Add the white wine, bring to the boil and remove the pan from the heat. Cut the fennel in half, remove the feathery foliage and set aside. Cut off the base of the fennel bulb and slice the bulb into strips. Grill the fennel seeds quickly in a pan, being careful not to let them burn. Crush the grilled fennel seeds.

Wash the tomatoes and remove their stalks. Dice the tomatoes. Peel the cloves of garlic and chop finely. Fry the strips of fennel in olive oil, add the garlic, fennel seeds and diced tomatoes. Stir gently. Add a dash of Pastis. Season to taste with salt and freshly ground pepper.

In the meantime, cook the spaghetti until al dente according to the instructions on the packaging. Drain the pasta and put it back in the pan. Stir some olive oil through it. Add the strips of veal and the vegetable mixture and stir gently. Serve immediately in pre-heated deep plates, garnish with the finely chopped foliage from the fennel and grated Pecorino.