Linguine with veal and ricotta 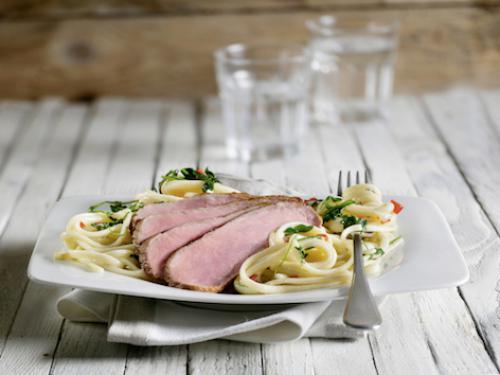 Take the veal out of the refrigerator 30 minutes before cooking. Pre-heat the oven to 80°C (176ºF) (upper and lower heat). Meanwhile heat 1 tbsp oil in a frying pan. Mash the peppercorns. Rub the salt and pepper on the meat and cook it in the hot oil, shortly, on all sides. Cover a baking tray with aluminum foil, put the meat on top and leave it to cook until pink for approximately 45 minutes.

Remove the tray from the oven, leave to rest for 10 minutes and only afterwards slice it into bite-sized pieces. Cook the linguine al dente, in hot water and salt by following the instructions on the package. Pour off and catch some of the cooking fluid. Put the linguine back into the pan. Peel the garlic and mince it. Remove the seeds from the chili and also mince it.

Serve with some shredded ricotta on top.